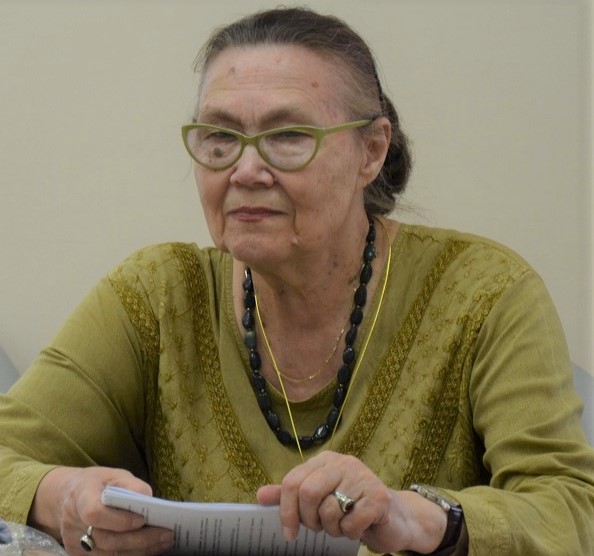 Employed at the Institute of Linguistics since 1964.

Elena Molchanova was born on March 10 of 1934 in Moscow. She graduated from the Institute of Asian and African Countries of MSU with a qualification in Iranian languages. Her thesis work was dedicated to morphology of the Tajik language. She finished full-time postgraduate study at the Institute of Linguistics at Academy of Sciences of the Soviet Union. She defended her PhD thesis 'Main aspects of the syntax in Middle Persian' and Dr.habil. thesis 'Problems of synchronic and historic description of Sivandi, a minority language of Iranian group'. In 2003, this topic was covered in a monograph 'Sivandi in synchronic and historic coverage'. Elena Molchanova has been working at the Institute of Linguistics for almost 57 years. She has a title and a medal 'Veteran of Labour'. In 2007, she became the Head of the Section of Iranian languages.

She participated in developing all fundamental works of the Section: a multivolumed set 'The basics of Iranian linguistics', a three-volumed set 'Iranian languages', two-volumed work 'The experience of historical and typological research of the Iranian languages'. She also worked on the following projects of the Institute: 'Linguistic Encyclopedic Dictionary' in Great Russian Encyclopedia; a collection 'Semiotics, linguistics, poetics: Dedicated to the 100th anniversary since the birth of Alexander Remormatsky'; a collection 'In the space of language and culture: sounds, signs, and meanings. A collection of articles dedicated to the 70th anniversary of Victor Vinogradov'; on collections dedicated to 70th anniversaries of Vladimir Alpatov and Valery Demyankov; on a number of collections of the Department of Indo-European languages.

She is the author of more than 170 works, including the ones published abroad. These works are dedicated to different majority and minority Iranian languages, as well as their dialects. She participates in many Russian and international congresses and conferences. An academic supervisor of Russian and foreign graduate students. In Iran, she was honored a title 'Chehreye mandegar' that is given to outstanding foreign specialists of Iranian studies. For many years, she has been a member of the Scientific Council at the Institute of Linguistics and of two Dissertation Councils (Institute of Linguistics and the Institute of Asian and African Countries of MSU).

Takes an active part in the upbringing and support of three granddaughters and two great-grandchildren.

Elena Molchanova is a member of editorial board for the collection 'Iranian Linguistics 2020'. Works from the international research conference 'Readings dedicated to the memory of Bogsho Lashkarbekov, 70th anniversary' (Moscow, 2020).