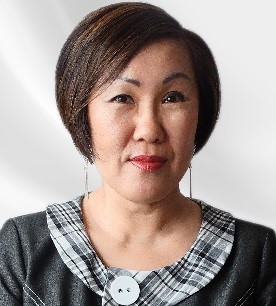 employed at the Institute since 2019

Erzhen Vladimirovna Khilkhanova graduated from the Department of Romanic and German languages and literatures of the Faculty of Philology, Lomonosov Moscow State University in 1991. Having finished the post-graduate school at the MSU, she defended the PhD thesis "Discourse of the "Bild" Newspaper as an Object of Linguistic Research". The degree of Dr. habil. is conferred after the defense of her second PhD thesis "Factors of Language Shift and Maintenance of Minority Languages: Discoursive and Sociolinguistic Analysis (the Case of Ethnic Buryatia)" (2010).

Erzhen V. Khilkhanova worked at the Buryat State University, the East-Siberian State Institute of Culture. She has teaching experience at universities abroad: at the Ruhr University (Bochum, German), at the Ca'Foscari University (Venice, Italy).

Erzhen V. Khilkhanova has over 100 scientific works including scientific monographs and articles published in Russian and Western scientific journals.

Erzhen V. Khilkhanova possesses a significant fundraising experience. She conducted scientific projects in the field of social anthropology at the Max Planck Institute (Germany, 2007 and 2016), the Ruhr University (Germany, 2002), the George Washington University (USA, 2002-2003). She performed as the head of a research team for the grant project of the International Association for Humanities "Border and language consciousness (on example of language situation and speech behavior of people in Transbaikalia)" (2012-2013).

Khilkhanova coordinates the Discussion and Analytical Club on language policy at the Institute of Linguistics, RAS; is the member of the editorial boards of scientific journals "Sociolinguistics" (the Institute of Linguistics, RAS), "Polylinguality and Transcultural Practices" (Peoples' Friendship University of Russia), the member of the Dissertation Council Д 212.022.05, speciality "Language Theory" at the Buryat State University. Also, she performed as an expert at the Russian Foundation for Basic Research (competition of fundamental research projects in linguistics and literary studies, regional round, 2018), an expert at the competition for the award of the State Prize of the Republic of Buryatia in science and technology (2016), nomination "The Humanities".

Erzhen V. Khilkhanova combines research and pedagogical activities. She developed curricula and taught courses at the graduate and undergraduate levels: "Sociolinguistics", "Ethnolinguistics", "Business English", and others. She is the author and co-author of 9 manuals in these disciplines.