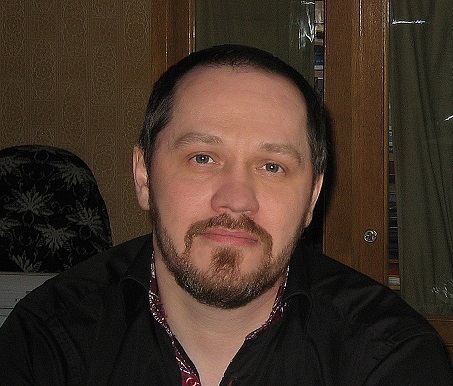 Works at the Institute of Linguistics since 2020.

Dmitry Rukhlyadev was born on October 27, 1974 in Dolgy Most village of Abansky District, Krasnoyarsk Krai. In 1995, he found out about the Faculty of Asian and African Studies at the St Petersburg University and decided to study there. Since early years, he was interested in history, languages, and culture of Turkic peoples, especially Siberian ones, and he traveled to Tuva, Khakassia, Yakutia, Azerbaijan, Dagestan, and Tatarstan by himself. In 1993, he started learning Tuvan language.

In 1996, he enrolled in the Department of Central Asia and Caucasus Studies of the Faculty of Asian and African Studies at the St Petersburg University. Throughout his studying process at the university, Sergey Klyashtorny remained his academic supervisor. Topic of the studies was also clear since the very beginning, and it was runic literary monuments of Old Turkic in linguistic, cultural, and historical aspects. While studying for a bachelor degree, Dmitry Rukhlyadev was studying Old Turkic languages, Turkish, Persian, Chagatai, Uzbek, English, and German languages. At the Department of Classical Philology of the Faculty of Philology (St Petersburg University), he was also studying Tocharian language under the guidance of Leonard Herzenberg. In 2000, he started studying Classical Chinese language under the guidance of Lev Menshikov and Sogdian language under the guidance of Vladimir Livshits. He had internship at the Manuscript department and the Asian and African studies archive at the Institute of Oriental Studies of RAS under the supervision of Sergey Klyashtorny. In 2002, he graduated with honors from Master's pragramme and got a degree.

In 2002, he got into full-time postgraduate programme at the Institute of Oriental Studies of RAS, into the Department of Turkic and Mongolian Studies. Professor Sergey Klyashtorny was his academic supervisor.

In 2005, he started working at the Section of Turkic and Mongolian Studies of the Institute of Linguistics of RAS as a junior researcher, and then became a researcher. While working at the section, he was compiling bibliographic literature reviews and abstracts of foreign publications. He was also presenting at the annual sessions of the Institute, Russian and international conferences, and round tables. He was going on expeditions and writing research articles as well. He collected biographical information of all former and current employees of the Section of Turkic and Mongolian Studies, made a guide to the Turkic funds of the Institute of Oriental Studies of the Russian Academy of Sciences, and published the materials on the Turkic languages he had prepared on their website. He was a reviewer in a number of journals ('Vostok/Oriens', 'Acta Linguistica Metropolitana'). He worked as a Turkic translator in various translation agencies in St. Petersburg, as a guide in museums, and as a library assistant at the Institute of Oriental Studies of RAS.

During his work at the Institute of Oriental Studies of RAS, he continued going to Tuva, Khakassia, Altai, as well as Kyrgyzstan, Turkmenistan, and karaites of Belarus. Participated in excavations of the Solkhat hillfort in Crimea.

In 2012, he took a trip to Kherson Oblast of Ukraine and to Northern part of Crimea. He studied runic and other Turkic inscriptions in the museums of Kherson, Simferopol, and Heniches'k, as well as Polovets stone statues at the Askania-Nova sanctuary. Took part in the archeological expedition to Arabat Spit. As a part of an epigraphic group, he took trips to Odes'ka Oblast', Nikilayevskaya Oblast', and Zaporiz'ka Oblast'.

In 2014, he took trips to Khakkasia, Tuva, and Minusinsky District of the Krasnoyarsk Krai, where he was collecting materials on epigraphy and dialects.

In 2015, he took a trip to Western Kazakhstan and collected epigraphy material on runic and pseudo-runic writing systems, as well as on tamgas.

In 2016, he took trips to Tuva and Mongolia. He studied runic monuments at the Orkhon river valley, Tonyukuk monument, and rock inscriptions of Northern and Central Mongolia. Also, he worked with runic monuments kept in museums and research cetres of Ulan-Bator.

In 2017, he went to China to collect materials on Turkic epigraphy and manuscripts of Gansu, Xinjiang, Inner Mongolia, and Shaanxi. In particular, he visited Western Yugurs in Sunan Autonomous County of the Gansu province and collected their manuscript and linguistic materials. He had an opportunity to learn about a large collection of Chinese and Turkic steles in Xian (Beilin).

In 2019, he took trips to Belarus and Crimea to study materials of the Tatar and Karaim languages kept in the libraries of Belarus, as well as Tatar epitaphs in Yevpatoriya, Staryi Krym, and Bakhchisarai.