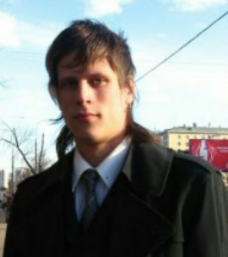 Junior Researcher, Laboratory for Study and Preservation of Minority Languages

Employed at the Institute since 2019.

In 2001, Konstantin Polivanov entered the Faculty of Computational Mathematics and Cybernetics at Moscow State University and in 2002 he transferred to the Faculty of Computer Sciences at the University of the Russian Academy of Education. He graduated in 2007 with distinction. For his diploma project, Polivanov developed and launched a web-service that linked a photo-printing studio with the web users from a specific district of Moscow.

From 2007 to 2010, he undertook postgraduate studies at URAE (specialisation 05.13.18 Mathematical simulation, numerical methods and software systems). He passed his comprehensive PhD admission exams with excellence. Polivanov started and has not finished his PhD thesis "Razrabotka poiskovoj sistemy, s ispol’zovaniem nestandartnyx algoritmov" [Developing a Search Engine Using Nonstandard Algorithms]. He was also devising a system of software analysis of audio data.

Since 2015, he is a member of the "Paseka" Project. "Paseka" is a community of web-studios, agencies, IT companies and independent professionals interested in working with non-profit organisations and social projects.

He was awarded the prize "Ključevoe slovo — 2018" [Keyword] by the Federal Agency for Ethnic Affairs (category — Best Multimedia Product). He contributed to preserving minority languages as a member of the developer team and a programmer of the website "Siberia's Minority Languages: Our Cultural Heritage."

Polivanov participated in the project "Creating the website "Siberia's Minority Languages: Our Cultural Heritage" (based on the languages of the Middle Yenisey and the Middle and Upper Taz basin)", 2012-2014, led by Olga Kazakevich at the MSU Research Computing Centre.