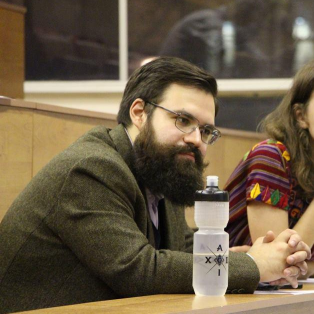 Employed at the Institute of Linguistics since 2011.

Belyaev graduated from the Department of Theoretical and Applied Linguistics of the Faculty of Philology of the Lomonosov Moscow State University. In 2014, he presented his PhD thesis "Correlative construction in the Ossetian language in typological illumination" (with Mikhail Daniel as a Research Supervisor).

As an experienced field researcher, Oleg Belyaev took part in several expeditions to study the Ossetian language and Dargin dialects, including those not previously described such as the Shirin dialect.

Belyaev participated in numerous scientific conferences, and in 2012 he received the 3rd-place award for the best postgraduate report at the 45th Annual Meeting of the Societas Linguistica Europaea (SLE-2012, Stockholm).

He is also one of the co-authors of the textbook "Introduction to the science of language" published in 2019 and edited by Olga Fedorova and Sergei Tatevosov. He wrote the chapters "Linguistic typology" and "Introspection".

He is one of the main developers of the Ossetian National Corpus.  In 2019, for his research on the grammar of the Ossetian language, he (became the laureate of the Moscow Government Prize for Young Scientists.

Belyaev is the author of more than 70 works which were published in issues indexed by the WoS and Scopus systems and in journals from the list of Higher Attestation Commission.