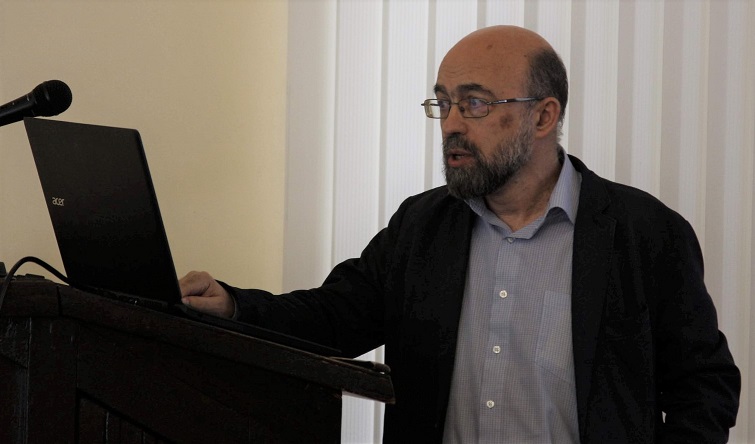 Head of Section of Typology

Employed at the Institute of Linguistics since 1982.

Vladimir Plungian is interested in the typology of grammatical categories, general morphology, corpus linguistics, poetics. He has worked with various data from Russian (and other Slavic), Uralic, Iranian, Caucasian, African and Oceanic languages.

PhD (1987), Dr.habil. (1998), Prof. (2005), full member of Russian Academy of Sciences (2016; corresponding member since 2009). Vladimir Plungian has published more than 260 academic papers (among them 8 monographs and textbooks). He is the author of the first Russian systematic Introduction to general morphology (2000) and grammatical semantics (2011).

Vladimir Plungian graduated from the Department of Structural and Applied Linguistics of the Moscow State Lomonosov University in 1982.

His 1987's Ph.D. thesis is Derivation and inflection in the verbal system of an agglutinative language (case study of Dogon). His 1998's Doctoral thesis is Grammatical categories, their relatives and substitutes.

Since 2016 he is the editor-in-chief of the journal «Voprosy jazykoznanija» [Topics in the study of language].

He is also a member of the European Academy of Sciences (Academia Europaea) and prize winner of «Prosvetitel’» [Enlightener] award in the field of popular scientific literature (2011).